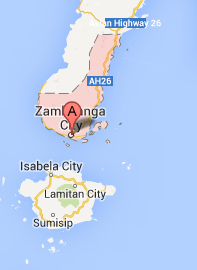 \n\nA heavy firefight erupted in the southern port city of Zamboanga between the military and some 100 militants from the separatist Moro National Liberation Front (MNLF) early on Monday,  Sept. 9. Followers of Moro National Liberation Front (MNLF) leader Nur Misuari entered the coastal area of Zamboaga city by boat at dawn, triggering clashes that had left one soldier dead and six wounded, the military said. The firefight has effectively shut down the city; Mayor Isabelle Climaco-Salazar ordered all schools and offices to remain closed for the day. Climaco-Salazar said the rebels’ goal was to raise their flag of independence at the Zamboanga City Hall. Security has been tightened in Zamboanga, especially around the city hall, with military and police personnel establishing security checkpoints.\n

\nAccording to preliminary information, the attackers, dressed in army fatigues and armed with heavy firearms and explosives, arrived aboard several boats off the city’s Barangay Rio Hondo and clashed with Philippine Navy patrols at around 0100. Authorities state that the militants have since penetrated the villages of Talon-Talon, Rio Hondo, Mariki, Sta. Catalina, Sta. Barbara, and Arena Blanco. Unconfirmed reports indicate that a group of MNLF fighters are holding 30 civilians hostage inside a mosque in Barangay Sta. Catalina. The ongoing clashes have left one member of the naval special forces dead and several others wounded.\n\nStreets were deserted and shops were shuttered. Heavily armed private security personnel as well as troops were guarding the airport, hotels, banks and other institutions, according to an AFP reporter on the ground. Authorities declared a curfew between 8pm and 5am